How’s it going?  Do you still feel like you’re “waiting on the Lord?”

Is there a possibility that you have gotten off track and aren’t in a place where you can hear Him?

I had a dream where I was driving down the interstate.  I got off at an exit and sat there asking God which direction to go.  Should I go left towards the town, right up the frontage road, straight into the parking lot of a restaurant?

I sat and sat asking God what to do – which direction did He want me to go??  I was ready to be obedient and wanted to hear from Him.  I waited and waited….Silence.

My mind began to float up, out of the car so I could look down on myself – kind of like that feeling you get when you have a fever and your head floats up to the ceiling…  Anyway, I could see myself sitting at the intersection in the car.  I floated higher and could see the exit ramp from the interstate and surrounding area like a map laid out under me.

I floated even higher until I could see back to the exit I had passed and ahead to the next one.  That’s where I saw Him – God!

He was waiting for me up at the next exit.  It was as if I could hear Him saying “When is she gonna get here?  I’m waiting to give her guidance if she would only get here…”

I had jumped the gun!  I had not listened for where to get off – I just wanted directions for which way to go in my current circumstances – without even stopping to ask if I was in the right place to begin with!

When I awoke, I had a new perspective.  I had felt the frustration of “waiting on the Lord” while He was, no doubt, feeling some frustration in waiting on me! 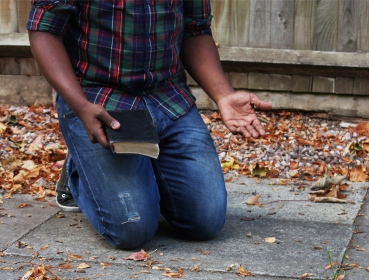 Are you where He wants you to be?

Ask the Lord to show you where He is, and where you need to be.

And see if you need to make a course correction in order to get yourself to the place where He has blessings waiting for you.